Open in the App

Plan your own routes

Join Ride with GPS and discover even more new routes and riding buddies. Print turn-by-turn cue sheets so you know where you are heading. And then, log your rides and watch your progress.

A wander up the Wandle

A good day out with Hoppo whose can be read in the comments below.

A good day out with Hoppo whose can be read in the comments below. Meanwhile view the ride at https://www.relive.cc/view/g11129902327
See other rides

Wednesday the 19th. It dawned cold but sunny, colder than the sun would have you believe. A mere stones throw for me to cycle to the start at Ealing common station to find stalwart Bernie already there. Soon to be joined by Jean, Jim, Alan, Woody, Steve T, Tony C, John Myal and his friend Ian Birch

Obviously cycling through West London is mainly about dodging traffic or finding cycle paths so I kept off main roads where possible. We were soon on the Towpath heading to Putney bridge and onto back roads and into Wandsworth park for 11's at the Cafe in the park. Coffee, tea and cake for some as we sat outside in the Sun although some still were feeling the chill.

Finding it hard to get back on the bikes after warming ourselves and good banter over coffee we finally ventured on into Wandsworth and King George park and the start of the Wandle trail proper. Garrat park and a lovely section close to the river and traffic free. Wandle Meadow Nature park, Wandle park and across Merton high street and a short section to lunch at the WaterMill grill (not as fancy as the name suggests) at Merton Abbey. The service and food are really good and not expensive. There is a working water mill, which generates it own electricity, and quaint little very old world gift shop.

Lunch over and photos taken we set off again along the Wandle crossing the Wimbledon/Croyden tramline, we obviously waited for a tram to pass big kids that we are. Into Morden Hall park and I added a loop round round the park before exiting onto and crossing the A24 and heading in the direction of Wimbledon and the short but sharp climb up Edge hill to Wimbledon common and an off road section to the Windmill for Tony C to take a photo when the group decided that tea in the cafe was the order of the day, again sitting outside in the very pleasant sunshine.

During my years as a runner I often ran on Wimbledon common and decided to take one of my old running routes back to Richmond park, it was not really cycle friendly in parts and turning onto a rough gravel section my front wheel slipped and down I went, a slightly sore knee and an even more damaged pride. We soon crossed the A3 into Richmond park and a nice section on the gravel cycle track to Sheen gate and down to the Thames path to Kew bridge. Over the bridge and very brief section of the South circular and into Lional road South, across the Great West Road and another nice section through Gunnersbury park and back roads to Ealing Broadway. It was at this point I discharged my duties as leader and left group to wend their own way home via Perivale and beyond. A really nice days cycling with good company and spring sunshine.

You do not currently participate in segments. You can change this setting here.

Ride this route frequently? Select the ride (or a section of it) in the elevation profile and create a segment to compare your ride performance against yourself (and others).

This route has been locked by an administrator and cannot be modified.
Close

What is Estimated Time?

Estimated Time shows a prediction of how long it would take you to ride a given route. This number is based on your recent riding history, and represents an estimate of moving time. Each time you upload a new ride, your Estimated Time profile will adjust to reflect your most recent riding. Only rides exceeding 10 miles (16 km) will affect these estimates.
Close

Estimated Time is one of our Basic features

What is Estimated Time?

Estimated Time shows a prediction of how long it would take you to ride a given route. This number is based on your recent riding history, and represents an estimate of moving time. Each time you upload a new ride, your Estimated Time profile will adjust to reflect your most recent riding. Only rides exceeding 10 miles (16 km) will affect these estimates.

Our Basic members have unrestricted access to everything we offer in our mobile apps. Learn more by visiting our Compare Plans page. 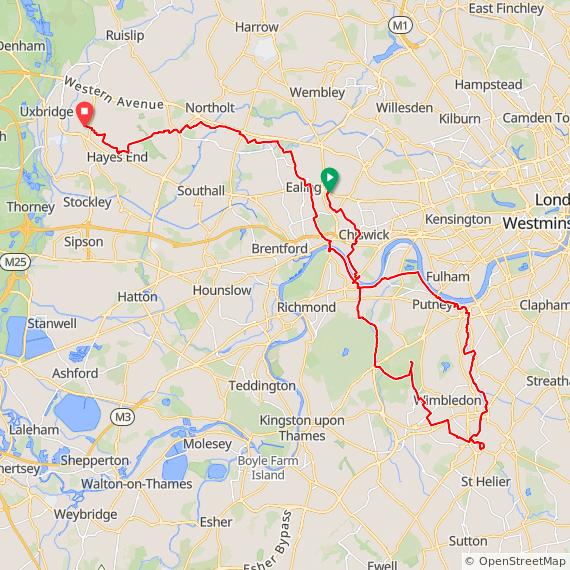 London, England, GB
A wander up the Wandle
Tony Cates

But, if you'd still rather sign-up without it, no problem. Just tell us a little about yourself: